These changes went live after nearly six weeks of testing and will be made for everyone except certain Asian languages.

The 280-character change comes after a series of updates over the past two years.  The company removed limits for character counts for photos, polls and other multimedia. They also removed character restrictions when connected users send private, direct messages to each other. These moves have come under increased pressure primarily from investors who are concerned with the market cap and stagnant growth of the company.

The impact of 280 characters

The 140-character limit is the essence of what has defined Twitter for a decade: Brevity. Those who wanted to be more verbose were encouraged to write a blog post and link to it. We all are aware of the rants of a few on Twitter that go across multiple tweets. We typically ignore what they say, and rarely are such rants positive.

Twitter claims that those who were involved in the test had “more engagement (Likes, Retweets, @mentions), got more followers, and spent more time on Twitter.” But little is known about those who were involved in the six-week testing period. We don’t know if they were accounts that typically receive more engagement than others. We do know that there were 1,971,627 tweets that used the phrase “280 characters” in the six weeks leading up to official rollout.

Although Twitter claims that most tweets during the test were still under the 140 character limit, this is most likely due to habit, not access. The result will undoubtedly be longer tweets and more verbose discussions on Twitter over time.

Consumers and B2C companies will have more space in which to complain, respond and post information. It will also help companies better comply with disclosure rules and regulations.

In the past few days, many of our clients have asked for best practices. They want to know where this leaves B2B marketers. As this is still a new item, and most of the social media publishing tools haven’t yet caught up with this change, there is still much to learn. But the best practices of Twitter remain (for now): 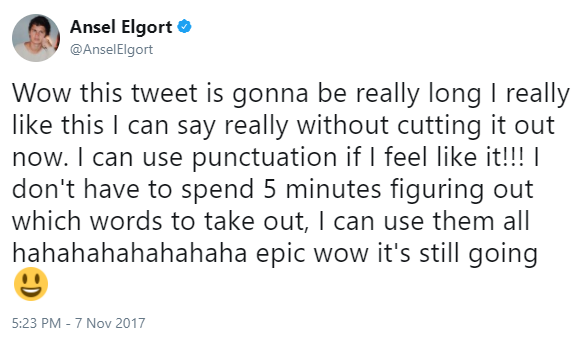 B2B companies should continue to watch how other brands – and users – react to the change.